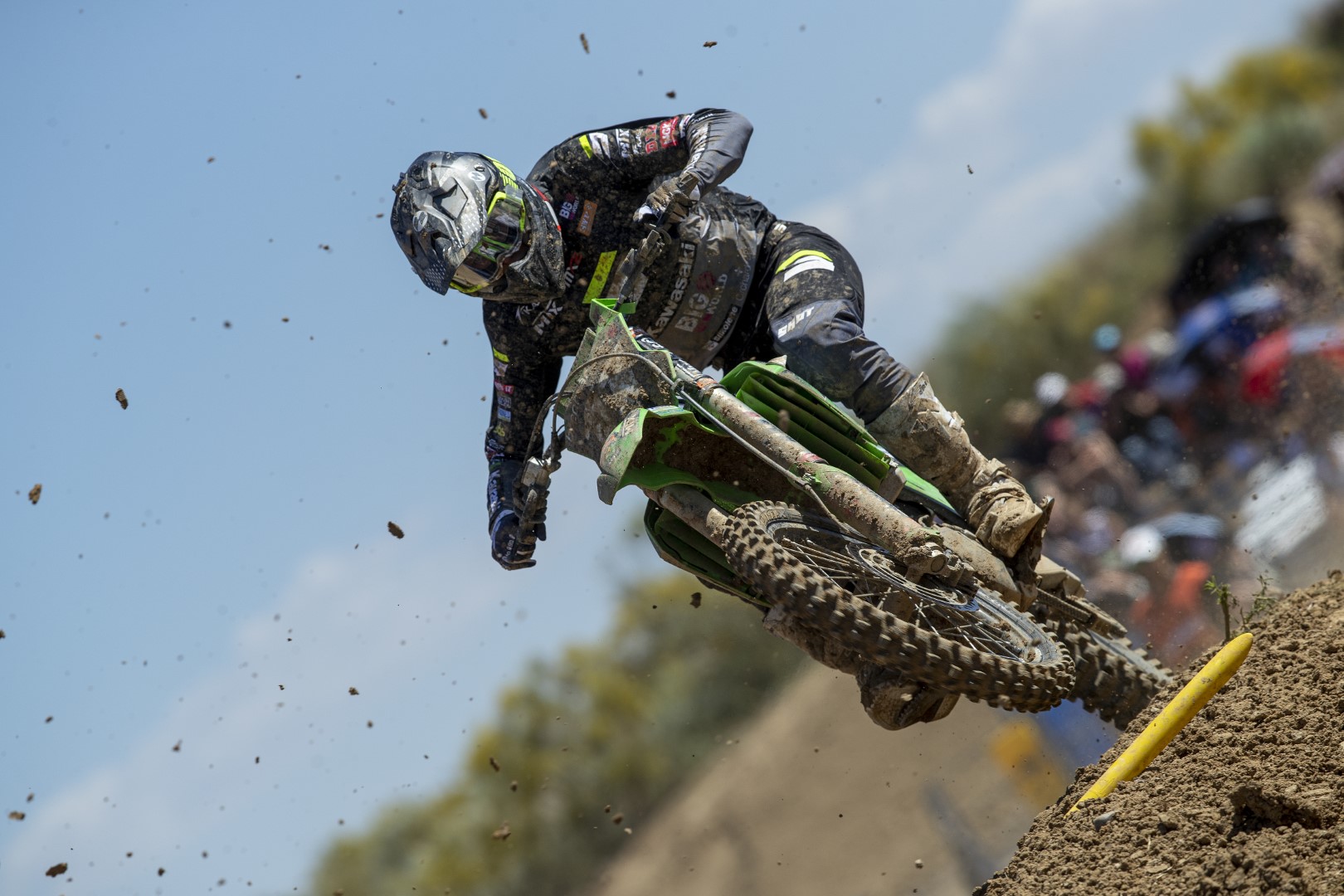 A succesful return for Courtney Duncan in Spain, as the 3x World Champion took the overall at the circuit of Intu Xanadú. A solid qualifying performance set Duncan up perfectly for the races ahead, pushing into the lead around the halfway mark of the first moto. It was an unrivaled display in race two as the KX250 took the holeshot. Leading the race Duncan knew that the overall was secured with a second-place as local rider Guillen took the lead. Duncan fended off series leader Nancy Van De Ven and took home the overall.

In the MX2 class, Mikkel Haarup struggled with starts and had some unfortunate entanglements with other riders, costing the Dane time at vital stages of the races. Able to salvage a 10th in race one, there was slightly more luck for the « 11 » in race two as he started the race in the top ten and was able to push his way through to 6th without too much difficulty. The Spanish track proved difficult to pass on, only able to enter the top 5 which he would eventually take across the finish line for 8th overall and continue to add solid points to the current 4th position.

Next up the team head to Ernee for the 10th round of the series. 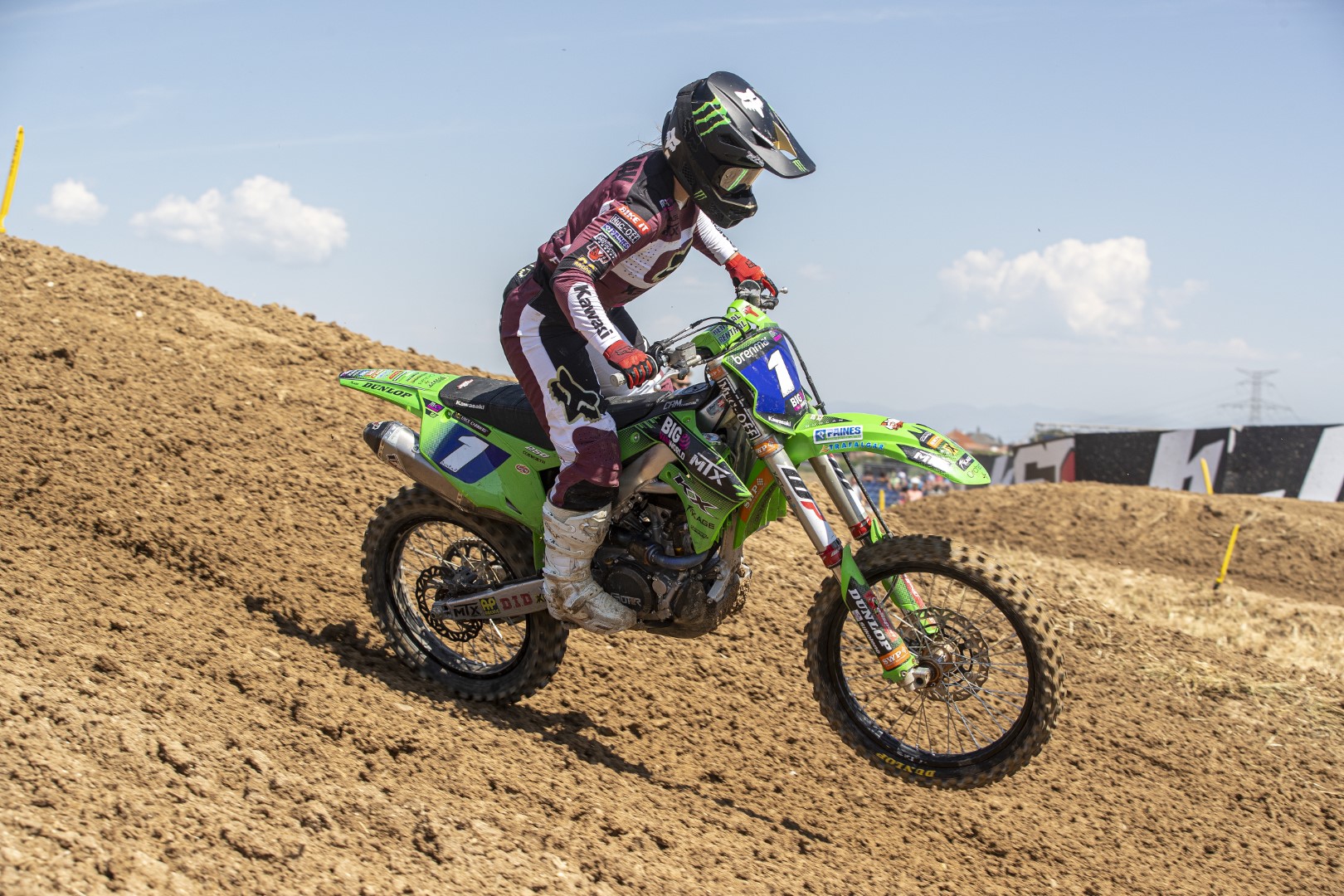 « It was good to have Courtney back on track, she looked comfortable out there and rose to the occasion, showing why she’s a Champion. Mikkel had another couple of solid results, it’s a shame he fell on the last lap of the first race losing 4 positions. Whilst we lost a few points on 3rd, we solidified 4th and we can now focus on pushing hard for 3rd over the next few rounds. We’ll be working on some improvements for the start mainly, which a few rounds ago was our strong point. Hopefully, we won’t be going from 33-degree heat to a mud-fest with thunderstorms forecasted for next weekend in Ernee. »

“It was a really tough day. I felt my pace was good but I just couldn’t get off the gate and had to come from the back both motos. With better starts we’ll be back on the podium but when you don’t get a start there is such a big chance of getting hooked up with other riders; on the second lap of the first race I hit a guy who had crashed and got stuck in his rear wheel. Top-five in the second moto was OK but I have more in me with better starts. “ 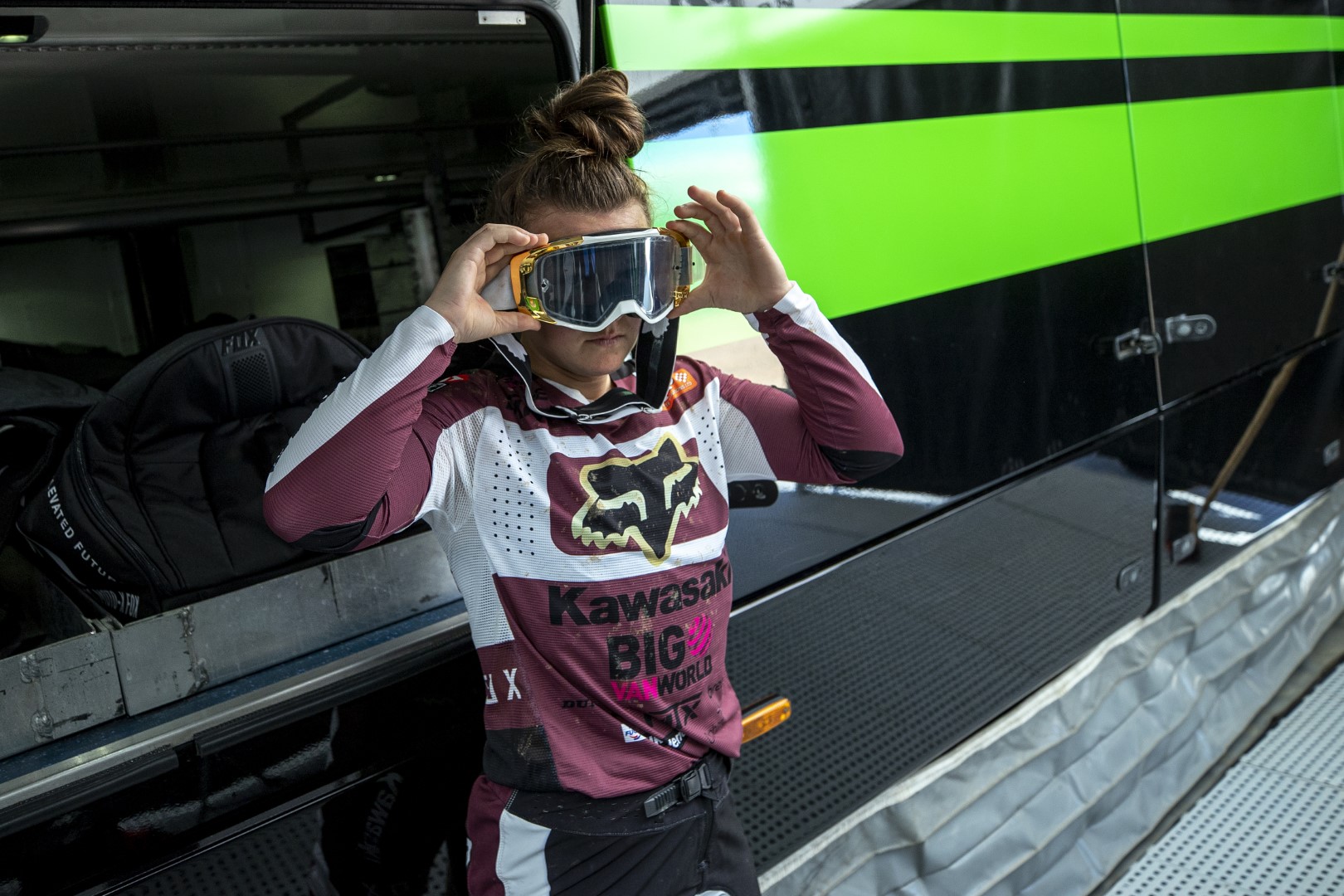 “I think I can be proud of my performance this weekend. It was great to grab the holeshot today and the first few laps were quite intense. It’s my first race for something like three months so I’m still a little rusty but I knew second today was enough to win the GP. I enjoyed the track both days. There were plenty of lines so I had a lot of fun and what a place to do it; thirty-three degrees and the Spanish crowd was unreal! We can take a lot of info from here for the future too; you come to the races to know that. I did what I had to do to take the win and I’m just so stoked to listen to the national anthem and raise that Kiwi flag on the podium today. The final round in Turkey is still a couple of months away so I’ll fly home to New Zealand this week to prepare for that.“

Monster Energy Yamaha Factory MXGP’s Maxime Renaux was nothing short of sensational at the ninth round of 19 in the FIM Motocross World Championship in Madrid, Spain. The recently turned 22-year-old Frenchman stormed to two emphatic race wins for his first-ever premier-class Grand Prix victory. Teammate Glenn Coldenhoff took a stunning Qualifying Race win and finished fifth in Race 1 and second in Race 2 for his second consecutive podium finish – on the second step. At the same time, Jeremy Seewer had to overcome some adversity for eighth overall.

On Saturday afternoon, Coldenhoff endured a stifling hot race to take his second Qualifying Heat win of the season. At the same time, teammates Renaux and Seewer put in strong rides to qualify third and fifth, respectively. Faced with even hotter temperatures on race day, the Spanish Grand Prix was a sizzling survival of the fittest. When the gates dropped for race 1, the full capacity crowd erupted as Renaux went bar-to-bar with fan favourite Jorge Prado around turn one.

Thriving under pressure, Renaux went from strength to strength, while Prado made a couple of costly mistakes. Capitalizing on Prado’s error, the current Championship Leader Tim Gajser took second position and applied some pressure to the reigning MX2 World Champion, Renaux. While Gajser kept the Frenchman honest for the entire 30-minute and two lap duration of the race, he was ultimately denied victory with ‘The Rookie’ holding on for a thrilling race win – his second of the season.

Starts were of the essence at the Xanadu-Arroyomolinos circuit, with the tight and twisty, rough and rutty clay-based venue proving difficult to pass on. Coldenhoff started fifth, despite feeling dizzy after a big crash on the sighting lap. Nevertheless, he managed to control the position to the flag.

At the same time, Seewer started on the cusp of the top-10 but spectacularly crashed out of seventh on lap-5. Fortunately, the ’91’ could make a quick remount and was able to salvage 11th.

Going into Race 2, Renaux was beaming with confidence. The French ace rocketed out of the gate, chasing Coldenhoff and Prado around turn-one. The teammates, ‘Hoff’ and Renaux, swapped second position a few times before Prado fell from the lead.

Once at the forefront, Renaux reveled. The Race 1 winner took full advantage of a clear track and impressively stormed to another stunning race victory to celebrate his first-ever premier class round win with a perfect 50-point score.

Coldenhoff remained unchallenged in second position, while Seewer made significant progress after making changes to his bike set-up and ended his day on a positive note in fourth.

After a memorable weekend in Spain, Renaux has strengthened his grip on second position in the MXGP Championship Standings. He now has a 46-point advantage over Seewer in third, while Coldenhoff remains fifth.

The MXGP of Spain was the first of three back-to-back Grands Prix. The next round of the FIM Motocross World Championship will take place in Ernee, France on the weekend of June 5th.

For full results from the MXGP of Spain, click here.

“My first overall win in the MXGP class and it’s my Mum’s birthday tomorrow, so it’s a nice gift for her. That was great. I felt great on the track this weekend, already from Saturday. I managed to get some good starts today and put together two consistent motos with no mistakes, so I am very very happy and cannot wait for my home GP next week.”

“Before Argentina, we did some testing and we made some big improvements in all areas, so we are on the way up. Yesterday was really good to win the qualifying heat, which gave me a good gate pick for today. Before the first moto, I made a huge crash, there was so much water on the track and I did not see it, so before I knew it, I was down on the ground. So, I felt a bit dizzy for the first moto, which was really tough for me, but I still managed to get a fifth. In the second moto I had a good start and a good fight with Maxime. I was following Max, but he was a bit too strong today, so 5-2 was the result. Another good weekend and like I said, it will only go up from here.”

“Overall, this has been a weekend to forget. I did turn it around a little bit in the second moto, but still, I just seem to struggle here even though I did arrive here happy and confident. I was better this year than last year, but I just made mistakes at the worst time and did not feel good on the bike. I don’t think my riding was too bad, but I couldn’t find my rhythm on this track. I made some changes to the bike set-up for the second moto, and it feels like we always find the right set-up then, but that’s something we need to work on. But for now, I am looking forward to the next GP’s. Some of my all-time favourite tracks are coming like Ernee and Teutschenthal, so I hope to find a good combination between me and the bike there, and then I can be much better.”

MXGP basked in more generous sunshine for the third trip in a row to the purpose-built Intu Xanadu Arroyomolinos circuit south of Madrid and a boisterous Grand Prix of Spain. Red Bull KTM came to the meeting fresh from Tom Vialle’s latest victory of the year in Sardinia and optimistic of more podium contention.

As well as the warm weather, Intu Xanadu Arroyomolinos was hard-packed, extremely rutty and bumpy in some corners and mixed fast sections with some impressively big jumps. Vialle quickly got to grips with the terrain and the layout; a holeshot leading to his second Pole Position of the season on Saturday.

From P1 in the gate on Sunday, the 21-year-old ripped to the front of both moto starts. In the first race he chased rival Jago Geerts until the Belgian made an early mistake and then finished a clear distance of Simon Laegenfelder. In the second affair he pressurized Geerts and another slip by his rivals allowed Vialle to take maximum profit. His fifth overall win from the last six Grands Prix was also his eighth podium appearance of the year.

Liam Everts took his DIGA Procross KTM 250 SX-F to 4th overall and ran at the front of both motos, especially the second sprint where he blasted to the holeshot. The Belgian’s 6-4 scorecard saw him narrowly miss his maiden podium result.

The MX2 championship table shows that Vialle holds the red plate and is ahead of Geerts by 10 points. MXGP will stop for the first of two dates in France next weekend. The steep hillside setting of Ernee brings the series to round ten and into the second half of the campaign.

Tom Vialle, 1st and 1st for 1st overall in MX2: “A great weekend for me. I controlled the first moto but it was not easy because there was a lot of water on the track. It was sketchy and I’m glad the ground was better in the second moto. Once Jago made a little mistake then I had the lead. I felt great on the bike. Some decent results before my home GP next weekend. It’s nice to have the red plate but Jago is riding well and the competition is close, so it’s tough for both of us. My riding style is good for Ernee so I’ll hope for another happy weekend.”